This page may bore the lot of you, but it is something personal that I want to share, brought about by Her Majesty’s visit a week or two ago to my home town in Northern Ireland.

Enniskillen may be a familiar name to those who watch the weather forecast on the BBC: it’s at the top left of the map and is often unseeable because the forecaster stands in the way; just look for where it is raining and that will be it!; seventy inches of rain a year, so no drought in that part of the world.  HM and the Duke discovered this for themselves, being delayed in their arrival by an hour by the rain that stopped them flying directly to the local airport, rain that had soaked the thousands waiting for her in town.

The Queen visited the cathedral there, bringing back memories from my youth, when I was a contralto member of the choir (I was good enough to sing solo over the BBC from Prep school), though I was disturbed by the modern painting of the wood panels everywhere.  It was a delight to see that my old school choir was leading the service she attended, though I was disappointed she was not invited to the school itself, proudly standing on a hill for the last 250 years.

It’s nearly seventy years since I left the place, but the main street we saw was almost exactly as it was then; the population had turned out to a man and that was different from my days when half of them would have ignored her.  Now, I was delighted to see, she visited the RC Church across the road from the Cathedral and was welcomed, so there is a chance that that part of the UK will see less of the ‘Troubles’ of the past.  Perhaps the fact that biggest Union Flag being waved by the crowd was upside down was an intentional move crying ‘distress’ from someone who objected.

No, it was just another feather in her cap, her way of knowing the right thing to do in a disturbed part of her now United Kingdom. 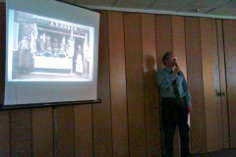 There was a time – less than a hundred years ago – when Old Coulsdon was a country village with its own squire who was the descendant of the Byron family who had owned the land for some 200 years, but now it is an outer suburb of London, utterly changed by a population of some thirty-five times the size.

So it was a delight to learn of a place which is still a village in many ways just a bit further away from London, Henfield in Sussex and our teacher was Alan Barwick of that ilk.

Alan was born in Henfield and still lives there like so many of its inhabitants.  Yes, it has grown, what with the railway making commuting easy, just like Coulsdon did, but it retains many of the trades and ways from olden times. An old map of the village from 1780 shows a hamlet of farms and associated trades.  The sandy ridges over the clay produced fine crops which are still a feature of the area, though much sand is nowadays exported around England for concrete building. When the railway came the sand used to be pushed on trucks by hand 300 yards from the quarry to the goods station.   By the end of the 19th century the population had grown to some 1,800.

Some features have gone, such as the village pound for stray animals and the whipping post recorded in 1836, but others have been added: the local bakers have been there since 1830, the butchers, still there, from the same time used to hang their meat outside the shop – Health and Safety! – and the local rope making business has gone, as has the lilac farm there under its glass bells until 1905.  The post windmills of the 1600s lasted until 1900.  The local squire’s family, the Borrers, in Henfield since at least the 17th century, sold out in 1930.  In 1781 William Borrer was famous for his work in plant science.

The turn to the 20th century brought new ideas added to some of the old trades: a telegraph office was added in 1905; the blacksmiths – three of them in 1900 – have gone but changed in 1920 to a car garage; schools, first recorded as early as 1830, flourish and cricket played on the common since 1820 still attracts visitors.  The village boasts the oldest Boy Scout Group in the world, still there since 1907.  The August Pram race started in the 1950s insisted that the mothers should drink a pint before pushing their prams; somehow typical of a lovely place to live, told to us by a splendid speaker.

Today:      Explore the Internet with Jim Mulvey, our  Webmaster.

September 6th: Glenda Law tells us of the Florida Everglades.

October 4th:  Still to be arranged.

Tony Simpson’s wife Sabina died on Thursday last week, very suddenly after failing health over the past two years, whilst visiting her family.  A delightful  and clever lady, she will be sadly missed by all who knew her.  Our heartfelt sympathies go to Tony and his family in this difficult time.

Alan Horwell and his wife Nancy celebrated their Diamond wedding last week and despite continuing trouble following his heart problems they had two parties of celebration marking their jubilee.

Dudley Coates continues to suffer from his diabetic ulcers and has to have daily attendance from the District Nurse.  Still, he answered the phone and sounds hopeful that modern medicine will continue to work its miracles.

Andrew Kellard sounded downright cheerful on the ‘phone when I called to ask how his prostate problems are going, probably because the nurses looking after him in Marsden seem to be doing all the right things.  He hopes to be with us today.

Your Editor was called to Mayday a week or two ago for a check on the bladder operation he reported last month and the CT scan showed no more problems; good.

Jim Mulvey reports that the visit by our Theatre Group to see Top Hat a couple of weeks ago proved to be one of their most successful, living up to the Daily Telegraph report on the show as being “the most sublimely performed, choreographed, orchestrated and costumed musical seen in the past 25 years”.  The outing started with a pre-show lunch at the Porters English restaurant where they had an excellent two-course lunch of a very high standard; English cooking at its best.  They then strolled to the nearby Aldwich Theatre to see one of the best shows in the West End at present.  Many of our members have said that they will definitely return to both the show and the restaurant.  Through our contacts we manage to get the best stalls seats in the house – none of your cheapies up in the gods – for less than half price, so we finished up paying less than the combined cost of a listed stalls seat price and a first class lunch.

Don’t forget the Old Coulsdon Fair this Saturday and come rain or sun it will be the best local fair to be had.  Jim will be emailing everyone this week to remind them to let him have items for the tombola on our Stand at the fair; our Stand alone will make it worth your while to visit the afternoon Fair.

It’s a while yet, but put it in your diaries anyway, that our Ladies’ Lunch will be on October 18th at Coulsdon Manor Hotel at 12.30 for 1 p.m.  You’ve all had the invitation and menu choice to fill in, so let Jim have it when you know you will be able to attend with the lady of your choice.

The Sanderstead & Riddlesdown ‘Cruising the Chilterns’ trip on July 25th is fully booked and with a waiting list of five hopefuls, so it’s too late to join them now.

On joining BP late 1959, I was posted to Nigeria as oil stock accountant for BP (West Africa)’s marketing areas stretching from Portuguese Guinea in the north to Angola in the south, twelve territories in all, arising from BP’s buyout of ARCO (Atlantic Richfield).

Met by an old missionary friend after an overnight flight from Heathrow (then a North Terminal prefab) via Rome and Kano, I arrived during the Harmattan season of dust storms and met with the Nigerian customs and immigration officers, the first of many.  I was introduced to them by my friend as a man from the IRA much to the confusion and later amusement of the Nigerian official.

Initially lodged in the bachelors’ mess, it was close to an (in)famous night club; the nightly beat of Nigerian music which had a rhythm all its own, more of a shuffle than a dance. First impressions of Nigeria were of smells, open drains, heat and noise. The office was not air-conditioned, but many years in the Far East with my parents had hardened me to such conditions.

My original task was to bring some semblance of order to the many territories’ stock accounts, an initial 45 depots in Nigeria whose sheds and buried storage of lubricants gives some idea of the task, complicated by different languages, currencies and measurements in use.  With a staff of fourteen Nigerians, the initial difficulty was to convert quantities and prices to a common denomination, i.e. Imperial gallons and Nigerian currency.  This caused many problems, least of all when conversion mistakes were made and every expat accountant was lined up regularly to find the mistakes in the many territories.  To add to the problems, quite often the mail failed to arrive. Power breakdowns, telephone interruptions and many other things were daily occurrences.

But survive we did, ingenuity was paramount despite any degrees or professional qualifications you may have had.  There were adequate club facilities available, including golf, tennis, swimming, cinema and eventually TV and of course the BBC General Overseas Service on shortwave radio, all relieving us from the local conditions of a humid climate, mosquitoes and various other deficiencies known only to ‘old coasters’ who have served in West Africa.