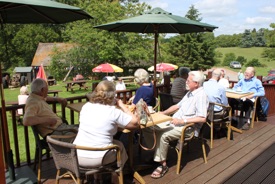 On 12th June we had a splendid outing to Ashdown Forest and in the afternoon a guided tour of Saint Hill Manor. After a washed out spring we had wonderful weather for our outing, the coach picking us up at the Tudor Rose on Old Coulsdon. After we picked up our guide for the day, Carol, in East Grinstead. Unfortunately on our way to Heaven Farm we were caught up in a horrendous traffic jam which closed the road. When we reached Heaven Farm we were treated to tea and biscuits before our tour of Ashdown Forest. Carol gave us a interesting history of the forest including details of the social structure of the common lands.   We arrived back at Heaven Farm for lunch which was described as a ‘Ploughmans Lunch’ but was in fact a full ham and cheese salad that was greatly appreciated. After lunch we headed […]

On the weekend of the 19th April Coulsdon Probus went on a cruise along the Gloucester Ship Canal. After a dreadful winter and a foul first part of April we were a little apprehensive regarding the weather for our cruise, but the clouds parted and we had the whole weekend in glorious sunshine. On Friday we were welcomed aboard by our captain for the weekend, Robert Anderson. who had his crew direct us to our compact, but comfortable cabins. Dinner was served followed by a quiz and drinks around the bar. Saturday morning saw us off on our cruise along the England’s first ship canal, a canal that by-passed the River Severn’s treacherous estuary and made Gloucester a major inland port. Before lunch we were introduced to the nautical game of Deck Quiots, the winner being June Dolan. After lunch we spent some time at the Slimbridge Wetland Centre. This […]

Our annual Ladies Luncheon was once again held in the Blenheim suite at Coulsdon Manor Hotel. We have held our premier luncheon at Coulsdon Manor for a few years now, mainly because of the fantastic value for the meals and wonderful ambience of the hotel and the Blenheim Suite. Once again the hotel and staff gave us wonderful service. A number of members and their guests commented on the high quality of the meal. The Ladies luncheon is the chance for members to pay tribute to the ladies and widows of past members. However, we did have a late arrival when confused member was telephoned and reminded that the luncheon was not next week! The toast to the ladies was given by Andrew Banfield OBE our Immediate Past Chairman and a reply was given by Pauline Payne, the wife of our 2012 chairman. Our 2012 chairman, Ian Payne, gave the […]

After the tremendous success of the joint meeting we held in 2011 it was agreed by everyone that we must have a meeting each year when ladies are to be included. This meeting will not overshadow our annual ‘Ladies Luncheon’ which takes place later in the year. It is to be a normal Probus meeting which includes the ladies. The lunch was excellently organised by Andrew Kellard with circular tables but as Andrew growled, “none of those horrible paper tablecloths” The food and service was up to it’s usual superb standard by Chris and his team. After lunch we had a speaker, organised by Phil Munson. Sadly, Phil is still recovering from his bad fall and could not join us. The speaker was Jack Devlin who described his life as a magician and how he took up the profession. Jack’s talk was not only interesting and humorous, but was interspersed […]